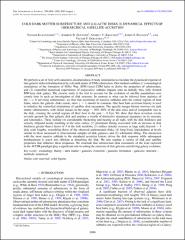 We perform a set of fully self-consistent, dissipationless N-body simulations to elucidate the dynamical response of thin galactic disks to bombardment by cold dark matter (CDM) substructure. Our method combines (1) cosmological simulations of the formation of Milky Way (MW)-sized CDM halos to derive the properties of substructure, and (2) controlled numerical experiments of consecutive subhalo impacts onto an initially thin, fully formed MW-type disk galaxy. The present study is the first to account for the evolution of satellite populations over cosmic time in such an investigation of disk structure. In contrast to what can be inferred from statistics of the z = 0 surviving substructure, we find that accretions of massive subhalos onto the central regions of host halos, where the galactic disks reside, since z ~ 1 should be common. One host halo accretion history is used to initialize the controlled simulations of satellite-disk encounters. The specific merger history involves six dark matter substructures, with initial masses in the range ~20%-60% of the disk mass and of comparable size to the disk, crossing the central regions of their host in the past ~8 Gyr. We show that these accretion events severely perturb the thin galactic disk and produce a wealth of distinctive dynamical signatures on its structure and kinematics. These include (1) considerable thickening and heating at all radii, with the disk thickness and velocity ellipsoid nearly doubling at the solar radius; (2) prominent flaring associated with an increase in disk thickness greater than a factor of 4 in the disk outskirts; (3) surface density excesses at large radii, beyond ~5 disk scale lengths, resembling those of the observed antitruncated disks; (4) long-lived, lopsidedness at levels similar to those measured in observational samples of disk galaxies; and (5) substantial tilting. The interaction with the most massive subhalo in the simulated accretion history drives the disk response while subsequent bombardment is much less efficient at disturbing the disk. We also explore a variety of disk and satellite properties that influence these responses. We conclude that substructure-disk encounters of the kind expected in the ΛCDM paradigm play a significant role in setting the structure of disk galaxies and driving galaxy evolution.