Active Galactic Nuclei in Groups and Clusters of Galaxies: Detection and Host Morphology 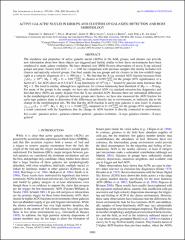 The incidence and properties of active galactic nuclei (AGNs) in the field, groups, and clusters can provide new information about how these objects are triggered and fueled, similar to how these environments have been employed to study galaxy evolution. We have obtained new XMM-Newton observations of seven X-ray selected groups and poor clusters with 0.02 < z < 0.06 for comparison with previous samples that mostly included rich clusters and optically selected groups. Our final sample has ten groups and six clusters in this low-redshift range (split at a velocity dispersion of σ = 500 kms^–1). We find that the X-ray selected AGN fraction increases from fA (L_X ≥ 10^41; M_R ≤ M*_R + 1) = 0.047^+0.023 _–0.016 in clusters to 0.091^+0.049 _–0.034 for the groups (85% significance), or a factor of 2, for AGN above an 0.3-8 keV X-ray luminosity of 10^41 ergs^–1 hosted by galaxies more luminous than M*_R + 1. The trend is similar, although less significant, for a lower-luminosity host threshold of M_R = –20 mag. For many of the groups in the sample, we have also identified AGN via standard emission-line diagnostics and find that these AGNs are nearly disjoint from the X-ray selected AGN. Because there are substantial differences in the morphological mix of galaxies between groups and clusters, we have also measured the AGN fraction for early-type galaxies alone to determine if the differences are directly due to environment, or indirectly due to the change in the morphological mix. We find that the AGN fraction in early-type galaxies is also lower in clusters f_A,n≥2.5 (L_X ≥ 10^41; M_R ≤ M*_R + 1) = 0.048^+0.028 _–0.019 compared to 0.119^+0.064 _–0.044 for the groups (92% significance), a result consistent with the hypothesis that the change in AGN fraction is directly connected to environment.