The Frequency of Barred Spiral Galaxies in the Near-Infrared 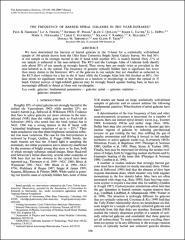 We have determined the fraction of barred galaxies in the H-band for a statistically well-defined sample of 186 spirals drawn from the Ohio State University Bright Spiral Galaxy Survey. We find 56% of our sample to be strongly barred in the H band while another 16% is weakly barred. Only 27% of our sample is unbarred in the near-infrared. The RC3 and the Carnegie Atlas of Galaxies both classify only about 30% of our sample as strongly barred. Thus strong bars are nearly twice as prevalent in the near-infrared as in the optical. The frequency of genuine optically hidden bars is significant but lower than many claims in the literature: 40% of the galaxies in our sample that are classified as unbarred in the RC3 show evidence for a bar in the H band while the Carnegie Atlas lists this fraction as 66%. Our data reveal no significant trend in bar fraction as a function of morphology in either the optical or H band. Optical surveys of high-redshift galaxies may be strongly biased against finding bars, as bars are increasingly difficult to detect at bluer rest wavelengths.