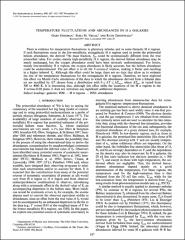 There is evidence for temperature fluctuations in planetary nebulae and in some Galactic H II regions. If such fluctuations occur in the low-metallicity, extragalactic H II regions used to probe the primordial helium abundance, the derived ^4He mass fraction, Y_P, could be systematically different from the true primordial value. For cooler, mainly high-metallicity H II regions, the derived helium abundance may be nearly unchanged, but the oxygen abundance could have been seriously underestimated. For hotter, mainly low-metallicity H II regions, the oxygen abundance is likely accurate, but the helium abundance could be underestimated. The net effect is to tilt the Y-versus-Z relation, making it flatter and resulting in a higher inferred Y_P. Although this effect could be large, there are no data that allow us to estimate the size of the temperature fluctuations for the extragalactic H II regions. Therefore, we have explored this effect via Monte Carlo simulations of the data in which the abundances derived from a fiducial data set are modified by ΔT chosen from a distribution with 0 ≤ ΔT ≤ ΔT_max, where ΔT_max is varied from 500 to 4000 K. It is interesting that, although this effect shifts the locations of the H II regions in the Y-versus-O/H plane, it does not introduce any significant additional dispersion.