The Distribution of Active Galactic Nuclei in Clusters of Galaxies 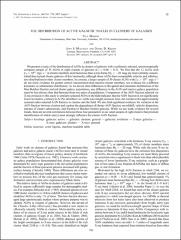 We present a study of the distribution of AGNs in clusters of galaxies with a uniformly selected, spectroscopically complete sample of 35 AGNs in eight clusters of galaxies at z = 0.06 → 0.31. We find that the 12 AGNs with L_X > 10^42 ergs s^-1 in cluster members more luminous than a rest-frame M_+R < -20 mag are more centrally concentrated than typical cluster galaxies of this luminosity, although these AGNs have comparable velocity and substructure distributions to other cluster members. In contrast, a larger sample of 30 cluster AGNs with L_X > 10^41 ergs s^-1 do not show evidence for greater central concentration than inactive cluster members, nor evidence for a different kinematic or substructure distribution. As we do see clear differences in the spatial and kinematic distributions of the blue Butcher-Oemler and red cluster galaxy populations, any difference in the AGN and inactive galaxy population must be less distinct than that between these two pairs of populations. Comparison of the AGN fraction selected via X-ray emission in this study to similarly selected AGNs in the field indicates that the AGN fraction is not significantly lower in clusters, contrary to AGNs identified via visible wavelength emission lines, but similar to the approximately constant radio-selected AGN fraction in clusters and the field. We also find significant evidence for variation in the AGN fraction between clusters and explore the dependence of cluster AGN fraction on redshift, velocity dispersion, amount of cluster substructure, and fraction of Butcher-Oemler galaxies. While we see weak evidence for several trends, there are several correlations between these four parameters in our small sample of eight clusters that preclude identification of which one(s) most strongly influence the cluster AGN fraction.