A Dusty Disk around WD 1150–153: Explaining the Metals in White Dwarfs by Accretion from the Interstellar Medium versus Debris Disks 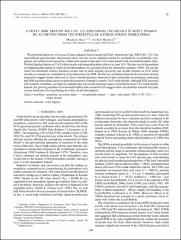 We report the discovery of excess K-band radiation from a metal-rich DAV white dwarf star, WD 1150-153. Our near-infrared spectroscopic observations show that the excess radiation cannot be explained by a (sub)stellar companion, and is likely to be caused by a debris disk similar to the other DAZ white dwarfs with circumstellar debris disks. We find that the fraction of DAZ white dwarfs with detectable debris disks is at least 14%. We also revisit the problem of explaining the metals in white dwarf photospheres by accretion from the interstellar medium (ISM). We use the observed interstellar column densities toward stars in close angular proximity and similar distance as DAZ white dwarfs to constrain the contribution of accretion from the ISM. We find no correlation between the accretion density required to supply metals observed in DAZs with the densities observed in their interstellar environment, indicating that ISM accretion alone cannot explain the presence of metals in nearby DAZ white dwarfs. Although ISM accretion will certainly contribute, our analysis indicates that it is not the dominant source of metals for most DAZ white dwarfs. Instead, the growing number of circumstellar debris disks around DAZs suggests that circumstellar material may play a more dominant role in polluting the white dwarf atmospheres.