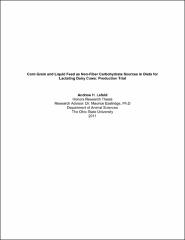 We hypothesized that adding liquid feed (LF; source of rapidly available sugar) would maintain or improve measures of dairy cattle performance to a greater degree when corn grain is more coarsely ground as compared to finely ground. The more rapidly available source of carbohydrates provided by the LF may compensate for the more slowly degradable carbohydrates of the coarsely ground corn (CGC); therefore, the performance of the dairy cattle provided the LF (Quality Liquid Feeds, Dodgeville, WI) and coarsely ground corn could be comparable to feeding finely ground corn (FGC). The study was conducted on 60 Holstein cows milked twice a day. The cows began the study at 60 days in milk (DIM), where they began a two-week covariate period (fed the FGC diet), followed by random assignment to one of five diets. The five diets were: steam-flaked corn (SFC) (control), FGC, CGC, FGC plus LF, and CGC plus LF. All diets were formulated to contain 16% alfalfa, 24% corn silage, 6% grass hay, and 54% grain. The diets were adjusted to maintain 36% neutral detergent fiber (NDF), 20.3% forage NDF, and 36% non-structural carbohydrates (NSC). For the diets which contained LF, 3.5% of the grain was removed from the diet, and 3.5% of the diet was LF. The FGC + LF and CGC + LF treatments contained 50.5% grain and 3.5% LF. No differences were observed in dry matter intake (DMI) among diets; however, the SFC diet produced the least efficient milk production. Feeding SFC decreased milk fat percentage (P < 0.10), and yield (P <0.05). Milk protein yield was similar among diets; however, milk protein percentage was higher for ground corn diets not supplemented with LF (P <0.05). Milk urea nitrogen was lowest for the SFC diet (P > 0.05), with no differences among other diets. Observations from this study revealed that supplementing LF in the diet with either FGC or CGC did not affect the performance of lactating dairy cows.