The Future Is Now: The Formation of Single Low-Mass White Dwarfs in the Solar Neighborhood 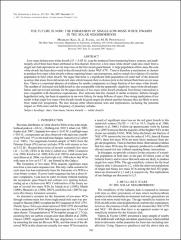 Low-mass helium-core white dwarfs (M < 0.45 Msun) can be produced from interacting binary systems, and traditionally all of them have been attributed to this channel. However, a low-mass white dwarf could also result from a single star that experiences severe mass loss on the first ascent giant branch. A large population of low-mass He-core white dwarfs has been discovered in the old metal-rich cluster NGC 6791. There is therefore a mechanism in clusters to produce low-mass white dwarfs without requiring binary star interactions, and we search for evidence of a similar population in field white dwarfs. We argue that there is a significant field population (of order half of the detected systems) that arises from old metal-rich stars which truncate their evolution prior to the helium flash from severe mass loss. There is a consistent absence of evidence for nearby companions in a large fraction of low-mass white dwarfs. The number of old metal-rich field dwarfs is also comparable with the apparently single low-mass white dwarf population, and our revised estimate for the space density of low-mass white dwarfs produced from binary interactions is also compatible with theoretical expectations. This indicates that this channel of stellar evolution, hitherto thought hypothetical only, has been in operation in our own Galaxy for many billions of years. One strong implication of our model is that single low-mass white dwarfs should be good targets for planet searches because they are likely to arise from metal-rich progenitors. We also discuss other observational tests and implications, including the potential impact on SNIa rates and the frequency of planetary nebulae.