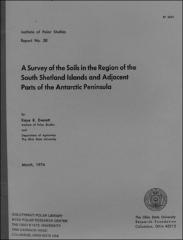 Institute of Polar Studies Report No. 58

The soils of the South Shetland Islands and the western Antarctic Peninsula have developed on the narrow, ice-free fringes of these land masses in coarse sandy materials and under a cold, wet climate. Although the soils range widely in morphology most belong to one of three broadly defined groups: (1) poorly and very poorly drained soils which are either mineral soils with a thin cover of moss or organic soils composed entirely of moss remains; and (2) somewhat poorly drained soils which are commonly developed on steep, quadi-stable north-facing slopes under a complex association of mosses and lichens; (3) well-drained, leached soils in upland positions, on moraines, or on elevated beaches. Commonly, well-drained soils, especially those on moraines and elevated beaches, are strongly influenced by birds and have a nearly complete cover of grass (Deschampsia antarctica) and/or mosses and lichens. Soils of this group represent the zonal soils of the region. Ranker soils composed entirely of slightly decomposed moss remains overlying bedrock, talus or occasionally mineral soil are common. Ornithogenetic (rookery) soils are developed sporadically throughout this region.