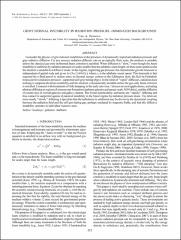 I consider the physics of gravitational instabilities in the presence of dynamically important radiation pressure and gray radiative diffusion. For any nonzero radiation diffusion rate on an optically thick scale, the medium is unstable unless the classical gas-only isothermal Jeans criterion is satisfied. When diffusion is "slow," even though the Jeans instability is stabilized by radiation pressure on scales smaller than the adiabatic Jeans length, on these same spatial scales the medium is unstable to a diffusive mode. In this regime, neglecting gas pressure, the characteristic growth timescale is independent of spatial scale and given by(3κ c_s^2)/(4πGc) , where c_s is the adiabatic sound speed. This timescale is that required for a fluid parcel to radiate away its thermal energy content at the Eddington limit, the Kelvin-Helmholz timescale for a radiation pressure-supported self-gravitating object. In the limit of "rapid" diffusion, radiation does nothing to suppress the Jeans instability and the medium is dynamically unstable unless the gas-only Jeans criterion is satisfied. I connect with treatments of Silk damping in the early universe. I discuss several applications, including photons diffusing in regions of extreme star formation (starburst galaxies and parsec-scale AGN disks), and the diffusion of cosmic rays in normal galaxies and galaxy clusters. The former (particularly, starbursts) are "rapidly" diffusing and thus cannot be supported against dynamical instability in the linear regime by radiation pressure alone. The latter are more nearly "slowly" diffusing. I speculate that the turbulence in starbursts may be driven by the dynamical coupling between the radiation field and the self-gravitating gas, perhaps mediated by magnetic fields, and that this diffusive instability operates in individual massive stars.