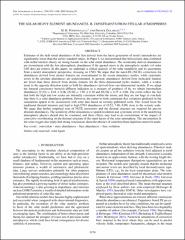 Estimates of the bulk metal abundance of the Sun derived from the latest generation of model atmospheres are significantly lower than the earlier standard values. In Paper I, we demonstrated that helioseismic data combined with stellar interiors theory set strong bounds on the solar metal abundance. The seismically derived abundances are inconsistent with the low photospheric abundances if the quoted errors in the atmospheric models (of order 0.05 dex) are correct. In this paper, we undertake a critical analysis of the solar metallicity and its uncertainty from a model atmospheric perspective, focusing on CNO. We argue that the non-LTE (NLTE) corrections for abundances derived from atomic features are overestimated in the recent abundance studies, while systematic errors in the absolute abundances are underestimated. In general, abundances derived from molecular features are lower than those derived from atomic features for the three-dimensional hydro models, while a weaker trend in the opposite direction tends to hold for abundances derived from one-dimensional models. If we adopt the internal consistency between different indicators as a measure of goodness of fit, we obtain intermediate abundances [C/H] = 8.44 ± 0.06, [N/H] = 7.96 ± 0.10 and [O/H] = 8.75 ± 0.08. The errors reflect the fact that both the high and low scales are internally consistent within the errors, and they are too large to conclude that there is a solar abundance problem. However, the center-to-limb continuum flux variations predicted in the simulations appear to be inconsistent with solar data based on recently published work. This would favor the traditional thermal structure and lead to high CNO abundances of (8.52, 7.96, 8.80) close to the seismic scale. We argue that further empirical tests of NLTE corrections and the thermal structure are required for precise absolute abundances. The sensitivity of the simulations to spatial resolution and systematic errors in the underlying atmospheric physics should also be examined, and these effects may lead to an overestimate of the impact of convective overshooting on the thermal structure of the outer layers of the solar atmosphere. The uncertainties in the solar oxygen also imply that strong conclusions about the absence of solar beryllium depletion cannot be made.