The Solar Heavy-Element Abundances. I. Constraints from Stellar Interiors 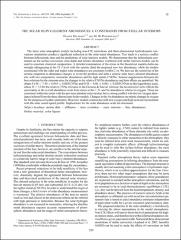 The latest solar atmosphere models including non-LTE corrections and three-dimensional hydrodynamic convection simulations predict a significant reduction in the solar metal abundance. This leads to a serious conflict between helioseismic data and the predictions of solar interiors models. We demonstrate that the helioseismic constraints on the surface convection zone depth and helium abundance combined with stellar interiors models can be used to constrain chemical composition. A detailed examination of the errors in the theoretical models disfavors strongly (disagreeing at the 15 σ level with the seismic data) the proposed new low abundance, while the models constructed with the older and higher solar abundances are consistent (within 2 σ). We then use the sensitivity of the seismic properties to abundance changes to invert the problem and infer a seismic solar heavy-element abundance mix with two components: meteoritic abundances and the light metals CNONe. Seismic degeneracies between the best solutions for the elements arise for changes in the relative CNONe abundances and their effects are quantified. We obtain Fe/H = 7.50 ± 0.045 ± 0.003(CNNe) and O/H = 8.86 ± 0.041 ± 0.025(CNNe) on the logarithmic scale, where H = 12 for the relative CNNe mixtures in the Grevese & Sauval mixture; the second error term reflects the uncertainty in the overall abundance scale from errors in the C, N, and Ne abundances relative to oxygen. These are consistent within the errors with the previous standard solar mixture but in strong conflict with the low oxygen abundance inferred from the three-dimensional hydro models. Changes in the Ne abundance can mimic changes in oxygen for the purposes of scalar constraints. However, models constructed with low oxygen and high neon are inconsistent with the solar sound speed profile. Implications for the solar abundance scale are discussed.