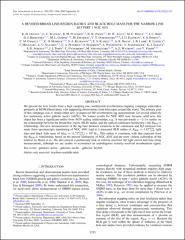 We present the first results from a high sampling rate, multimonth reverberation mapping campaign undertaken primarily at MDM Observatory with supporting observations from telescopes around the world. The primary goal of this campaign was to obtain either new or improved Hβ reverberation lag measurements for several relatively low luminosity active galactic nuclei (AGNs). We feature results for NGC 4051 here because, until now, this object has been a significant outlier from AGN scaling relationships, e.g., it was previously a ~2-3σ outlier on the relationship between the broad-line region (BLR) radius and the optical continuum luminosity—the R_BLR-L relationship. Our new measurements of the lag time between variations in the continuum and Hβ emission line made from spectroscopic monitoring of NGC 4051 lead to a measured BLR radius of R_BLR = 1.87^+0.54_–0.50 light days and black hole mass of M_BH = (1.73^+0.55_–0.52) × 10^6 Msun. This radius is consistent with that expected from the R_BLR-L relationship, based on the present luminosity of NGC 4051 and the most current calibration of the relation by Bentz et al.. We also present a preliminary look at velocity-resolved Hβ light curves and time delay measurements, although we are unable to reconstruct an unambiguous velocity-resolved reverberation signal.