Interpreting the Observed Clustering of Red Galaxies at z ~ 3 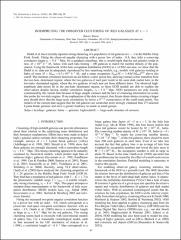 Daddi et al. have recently reported strong clustering of a population of red galaxies at z ~ 3 in the Hubble Deep Field-South. Fitting the observed angular clustering with a power law of index -0.8, they infer a comoving correlation length r_0 ~ 8 h^-1 Mpc; for a standard cosmology, this r_0 would imply that the red galaxies reside in rare, M ≥ 10^13 h^-1 Msun halos, with each halo hosting ~100 galaxies to match the number density of the population. Using the framework of the halo occupation distribution (HOD) in a ΛCDM universe, we show that the Daddi et al. data can be adequately reproduced by less surprising models, e.g., models with galaxies residing in halos of mass M > M_min = 6.3 × 1011 h^-1 Msun and a mean occupation N_avg(M) = 1.4(M/M_min)0.45 above this cutoff. The resultant correlation functions do not follow a strict power law, showing instead a clear transition from the one-halo-dominated regime, where the two galaxies of each pair reside in the same dark matter halo, to the two-halo-dominated regime, where the two galaxies of each pair are from different halos. The observed high-amplitude data points lie in the one-halo-dominated regime, so these HOD models are able to explain the observations despite having smaller correlation lengths, r0 ~ 5 h^-1 Mpc. HOD parameters are only loosely constrained by the current data because of large sample variance and the lack of clustering information on scales that probe the two-halo regime. If our explanation of the data is correct, then future observations covering a larger area should show that the large-scale correlations lie below a θ-1.8 extrapolation of the small-scale points. Our models of the current data suggest that the red galaxies are somewhat more strongly clustered than UV-selected Lyman break galaxies and have a greater tendency to reside in small groups.