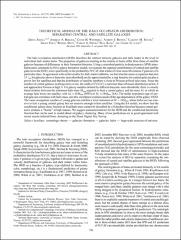 The halo occupation distribution (HOD) describes the relation between galaxies and dark matter at the level of individual dark matter halos. The properties of galaxies residing at the centers of halos differ from those of satellite galaxies because of differences in their formation histories. Using a smoothed particle hydrodynamics (SPH) simulation and a semianalytic (SA) galaxy formation model, we examine the separate contributions of central and satellite galaxies to the HOD, more specifically to the probability P(N|M) that a halo of virial mass M contains N galaxies of a particular class. In agreement with earlier results for dark matter subhalos, we find that the mean occupation function (N)M for galaxies above a baryonic mass threshold can be approximated by a step function for central galaxies plus a power law for satellites and that the distribution of satellite numbers is close to Poisson at fixed halo mass. Since the number of central galaxies is always zero or one, the width of P(N|M) is narrower than a Poisson distribution at low N and approaches Poisson at high N. For galaxy samples defined by different baryonic mass thresholds, there is a nearly linear relation between the minimum halo mass M_min required to host a central galaxy and the mass M_1 at which an average halo hosts one satellite, with M_1 approx 14M_min (SPH) or M_1 approx 18Mmin (SA). The stellar population age of central galaxies correlates with halo mass, and this correlation explains much of the age dependence of the galaxy HOD. The mean occupation number of young galaxies exhibits a local minimum at M ~ 10M_min where halos are too massive to host a young central galaxy but not massive enough to host satellites. Using the SA model, we show that the conditional galaxy mass function at fixed halo mass cannot be described by a Schechter function because central galaxies produce a "bump" at high masses. We suggest parameterizations for the HOD and the conditional luminosity function that can be used to model observed galaxy clustering. Many of our predictions are in good agreement with recent results inferred from clustering in the Sloan Digital Sky Survey.