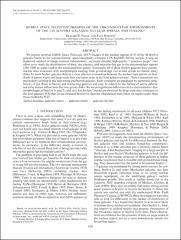 We present archival Hubble Space Telescope (HST) images of the nuclear regions of 43 of the 46 Seyfert galaxies found in the volume-limited, spectroscopically complete CfA Redshift Survey sample. Using an improved method of image contrast enhancement, we create detailed high-quality "structure maps" that allow us to study the distributions of dust, star clusters, and emission-line gas in the circumnuclear regions (100-1000 pc scales) and in the associated host galaxy. Essentially all of these Seyfert galaxies have circumnuclear dust structures with morphologies ranging from grand-design two-armed spirals to chaotic dusty disks. In most Seyfert galaxies there is a clear physical connection between the nuclear dust spirals on hundreds of parsec scales and large-scale bars and spiral arms in the host galaxies proper. These connections are particularly striking in the interacting and barred galaxies. Such structures are predicted by numerical simulations of gas flows in barred and interacting galaxies and may be related to the fueling of active galactic nuclei by matter inflow from the host galaxy disks. We see no significant differences in the circumnuclear dust morphologies of Seyfert 1s and 2s, and very few Seyfert 2 nuclei are obscured by large-scale dust structures in the host galaxies. If Seyfert 2s are obscured Seyfert 1s, then the obscuration must occur on smaller scales than those probed by HST.