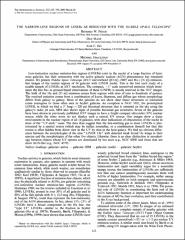 Low-ionization nuclear emission-line regions (LINERs) exist in the nuclei of a large fraction of luminous galaxies, but their connection with the active galactic nucleus (AGN) phenomenon has remained elusive. We present Hubble Space Telescope (HST) narrowband ([O III] λ5007 and Hα+[N II]) emission-line images of the central regions of 14 galaxies with LINER nuclei. This is the first such study of a sizable sample of LINERs at HST resolution. The compact, ~1'' scale unresolved emission which dominates the line flux in ground-based observations of these LINERs is mostly resolved in the HST images. The bulk of the Hα and [O III] emission comes from regions with sizes of tens to hundreds of parsecs. The resolved emission comes from a combination of knots, filaments, and diffuse gas whose morphology differs from galaxy to galaxy. Most of the galaxies do not show clear linear structures or ionization cones analogous to those often seen in Seyfert galaxies. An exception is NGC 1052, the prototypical LINER, in which we find a 3'' long (~250 pc) biconical structure that is oriented on the sky along the galaxy's radio jet axis. M84 also shows signs of possible biconical gas structures. Seven of the galaxies have been shown in previously published HST images to have a bright compact ultraviolet (UV) nuclear source, while the other seven do not display such a central UV source. Our images show a dusty environment in the nuclear region of all 14 galaxies, with clear indications of obscuration of the nuclei in most of the "UV-dark" cases. The data thus suggest that the line-emitting gas in most LINERs is photoionized by a central source (which may be stellar, nonstellar, or a combination thereof) but that this source is often hidden from direct view in the UV by dust in the host galaxy. We find no obvious differences between the morphologies of the nine "LINER 1.9s" with detected weak broad Hα wings in their spectra and the morphologies of the other five objects. Likewise, there is no clear distinction in morphology between objects whose UV spectra are dominated by hot stars (e.g., NGC 4569) and those that are more AGN-like (e.g., NGC 4579).