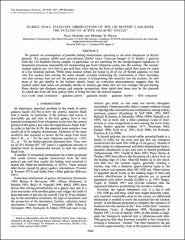 We present an investigation of possible fueling mechanisms operating in the inner kiloparsec of Seyfert galaxies. We analyze visible and near-infrared Hubble Space Telescope images of 24 Seyfert 2 galaxies from the CfA Redshift Survey sample. In particular, we are searching for the morphological signatures of dynamical processes responsible for transporting gas from kiloparsec scales into the nucleus. The circumnuclear regions are very rich in gas and dust, often taking the form of nuclear spiral dust lanes on scales of a few hundred parsecs. While these nuclear spirals are found in 20 of our 24 Seyfert galaxies, we find only five nuclear bars among the entire sample, strongly reinforcing the conclusions of other investigators that nuclear bars are not the primary means of transporting this material into the nucleus. An estimate of the gas density in the nuclear spirals, based on extinction measurements, suggests that the nuclear spiral dust lanes are probably shocks in nuclear gas disks that are not strongly self-gravitating. Since shocks can dissipate energy and angular momentum, these spiral dust lanes may be the channels by which gas from the host galaxy disks is being fed into the central engines.