The Discovery of a Companion to the Lowest Mass White Dwarf 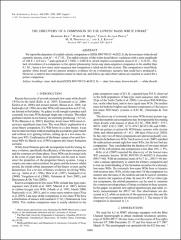 We report the detection of a radial velocity companion to SDSS J091709.55+463821.8, the lowest mass white dwarf currently known, with M ~ 0.17 Msun. The radial velocity of the white dwarf shows variations with a semi-amplitude of 148.8 ± 6.9 km s^-1 and a period of 7.5936 ± 0.0024 hr, which implies a companion mass of M ≥ 0.28 Msun. The lack of evidence of a companion in the optical photometry forces any main-sequence companion to be smaller than 0.1 Msun, hence a low-mass main-sequence star companion is ruled out for this system. The companion is most likely another white dwarf, and we present tentative evidence for an evolutionary scenario that could have produced it. However, a neutron star companion cannot be ruled out, and follow-up radio observations are required to search for a pulsar companion.