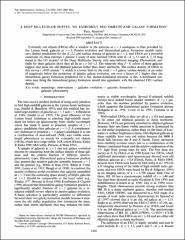 Extremely red objects (EROs) offer a window to the universe at z ~ 1 analogous to that provided by the Lyman break galaxies at z = 3. Passive evolution and hierarchical galaxy formation models make very distinct predictions for the K (2.2 μm) surface density of galaxies at z ~ 1, and EROs are a powerful constraint on these theories. I present a study of nine resolved EROs with R-K ≥ 5.3 and K ≤ 18 mag found in the 185 arcmin^2 of the Deep Multicolor Survey with near-infrared imaging. Photometric redshifts for these galaxies show they all lie at z = 0.8–1.3. The relatively blue J-K colors of these galaxies suggest that most are old elliptical galaxies rather than dusty starbursts. The surface density of EROs in this survey (>0.05 arcmin^-2), which is a lower limit to the total z ~ 1 galaxy surface density, is an order of magnitude below the prediction of passive galaxy evolution, yet over a factor of 2 higher than the hierarchical galaxy formation prediction for a flat, matter-dominated universe. A flat, Λ-dominated universe may bring the hierarchical galaxy formation model into agreement with the observed ERO surface density.