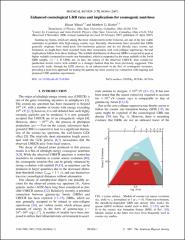 Gamma-ray bursts, which are among the most violent events in the Universe, are one of the few viable candidates to produce ultra high-energy cosmic rays. Recently, observations have revealed that GRBs generally originate from metal-poor, low-luminosity galaxies and do not directly trace cosmic star formation, as might have been assumed from their association with core-collapse supernovae. Several implications follow from these findings. The redshift distribution of observed GRBs is expected to peak at higher redshift (compared to cosmic star formation), which is supported by the mean redshift of the Swift GRB sample, (z)-3. If GRBs are, in fact, the source of the observed UHECR, then cosmic-ray production would evolve with redshift in a stronger fashion than has been previously suggested. This necessarily leads, through the GZK process, to an enhancement in the flux of cosmogenic neutrinos, providing a near-term approach for testing the gamma-ray burst-cosmic-ray connection with ongoing and proposed UHE neutrino experiments.