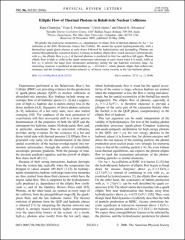 We predict the transverse momentum (p_T) dependence of elliptic flow of thermal photons for Au+Au collisions at the BNL Relativistic Heavy Ion Collider. We model the system hydrodynamically, with a thermalized quark-gluon plasma at early times followed by hadronization and decoupling. Photons are emitted throughout the expansion history. Contrary to hadron elliptic flow, which increases monotonically with p_T, the elliptic flow v_2(p_T) of thermal photons is predicted to first rise and then fall again. Photon elliptic flow at high p_T reflects the quark momentum anisotropy at early times when it is small, while at low p_T it mirrors the large pion momentum anisotropy during the late hadronic emission stage. An interesting structure is predicted at intermediate p_T∼0.4 GeV/c, where photon elliptic flow reflects the momenta and the (compared to pions) reduced v_2 of heavy vector mesons in the late hadronic phase.