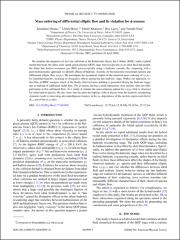 We simulate the dynamics of Au+Au collisions at the Relativistic Heavy Ion Collider (RHIC) with a hybrid model that treats the dense early quark-gluon plasma (QGP) stage macroscopically as an ideal fluid but models the dilute late hadron resonance gas (HG) microscopically using a hadronic cascade. By comparing with a pure hydrodynamic approach we identify effects of hadronic viscosity on the transverse momentum spectra and differential elliptic flow v_2(p_T). We investigate the dynamical origins of the observed mass ordering of v_2(p_T) for identified hadrons, focusing on dissipative effects during the late hadronic stage. Within our approach, we find that, at RHIC energies, much of the finally observed mass splitting is generated during the hadronic stage, due to buildup of additional radial flow. The ϕ meson, having a small interaction cross section, does not fully participate in this additional flow. As a result, it violates the mass-ordering pattern for v_2(p_T) that is observed for other hadron species. We also show that the early decoupling of the ϕ meson from the hadronic rescattering dynamics leads to interesting and unambiguous features in the p_T dependence of the nuclear suppression factor R_AA and of the ϕ/p ratio.