Suppression of tunneling in a superconducting persistent-current qubit 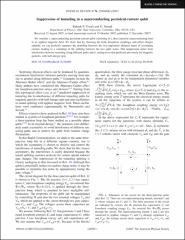 We consider a superconducting persistent-current qubit consisting of a three-junction superconducting loop in an applied magnetic field. We show that by choosing the field, Josephson couplings, and offset charges suitably, we can perfectly suppress the tunneling between the two oppositely directed states of circulating current, leading to a vanishing of the splitting between the two qubit states. This suppression arises from interference between tunneling along different paths and is analogous to that predicted previously for magnetic particles with half-integer spin.