Investigation of Respiration Unduced Strain Caused on the Rib 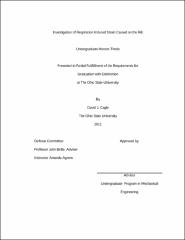 Thoracic injuries specifically account for approximately 30% of serious injuries within the United States. Age-associated bone loss and a deterioration of bone quality in elderly patients‟ increases the likelihood of bone fractures during a thoracic impact. Bone quality can be quantified by examining microfeatures of bone, such as microfractures. Cyclic loading of ribs during normal respiration may contribute to the creation of fatigue damage in the form of microfractures, which can adversely affect bone strength. In order to observe the microdamage induced during a thoracic impact, which could lead to failure, the „normal‟ condition of elderly ribs must be investigated prior to any manipulation. Since microfractures are initiated in regions of bone that experience high local strains, it is necessary to measure strain patterns in ribs during normal conditions of breathing. This will allow researchers to hypothesize possible locations of high microfracture density and identify those locations which may have an increased risk for failure. The objective of this study is to determine areas of high strain in the bony thorax during breathing. A Post-Mortem Human Subject was instrumented with 30 strain gauges to the cutaneous surface of ribs 2, 4,6,7,8 and 10 at anterior, middle (lateral), and posterior locations. A respirator bag was used to simulate shallow and deep respiratory patterns. The results showed that there was: 1) Significant difference between matching bilateral strain values during simulated respiration, 2) The strain values in the posterior region were statistically less than in the anterior region during simulated respiration but not significant, and 3) Strain values did not significantly vary by rib level during simulated respiration.