Tale of two curricula: The performance of 2000 students in introductory electromagnetism 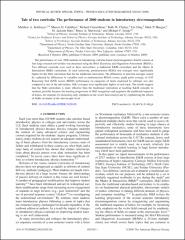 The performance of over 2000 students in introductory calculus-based electromagnetism (E&M) courses at four large research universities was measured using the Brief Electricity and Magnetism Assessment (BEMA). Two different curricula were used at these universities: a traditional E&M curriculum and the Matter & Interactions (M&I) curriculum. At each university, postinstruction BEMA test averages were significantly higher for the M&I curriculum than for the traditional curriculum. The differences in post-test averages cannot be explained by differences in variables such as preinstruction BEMA scores, grade point average, or SAT Reasoning Test (SAT) scores. BEMA performance on categories of items organized by subtopic was also compared at one of the universities; M&I averages were significantly higher in each topic. The results suggest that the M&I curriculum is more effective than the traditional curriculum at teaching E&M concepts to students, possibly because the learning progression in M&I reorganizes and augments the traditional sequence of topics, for example, by increasing early emphasis on the vector field concept and by emphasizing the effects of fields on matter at the microscopic level.

©2009 The American Physical Society
This article is available under the terms of the Creative Commons Attribution 3.0 License. Further distribution of this work must maintain attribution to the author(s) and the published article’s title, journal citation, and DOI.