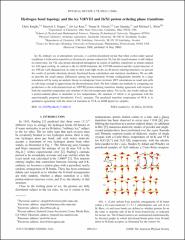 Ice Ih, ordinary ice at atmospheric pressure, is a proton-disordered crystal that when cooled under special conditions is believed to transform to ferroelectric proton-ordered ice XI, but this transformation is still subject to controversy. Ice VII, also proton disordered throughout its region of stability, transforms to proton-ordered ice VIII upon cooling. In contrast to the ice Ih/XI transition, the VII/VIII transition and the crystal structure of ice VIII are well characterized. In order to shed some light on the ice Ih proton ordering transition, we present the results of periodic electronic density functional theory calculations and statistical simulations. We are able to describe the small energy differences among the innumerable H-bond configurations possible in a large simulation cell by using an analytic theory to extrapolate from electronic DFT calculations on small unit cells to cells large enough to approximate the thermodynamic limit. We first validate our methods by comparing our predictions to the well-characterized ice VII/VIII proton ordering transition, finding agreement with respect to both the transition temperature and structure of the low-temperature phase. For ice Ih, our results indicate that a proton-ordered phase is attainable at low temperatures, the structure of which is in agreement with the experimentally proposed ferroelectric Cmc2_1 structure. The predicted transition temperature of 98 K is in qualitative agreement with the observed transition at 72 K on KOH-doped ice samples.