The effects of HMBi on nitrogen fractions in continuous culture fermenters 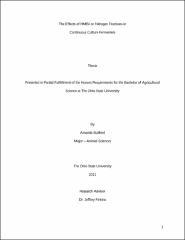 2-hydroxy-4-(methylthio)-butanoic acid (HMB) has been used for years in the feed industry as a precursor for the limiting amino acid, methionine (Met). Because Met is one of the limiting amino acids in a dairy cow’s diet, increasing the amount of Met absorbed from the small intestine should allow the other non-limiting amino acids (AA) to be converted to more milk protein and thereby decrease the elimination of ammonia-nitrogen (NH3-N) in the waste. An isopropyl ester was attached to HMB (HMBi) to slow its degradation rate in the rumen to allow for more uptake by the rumen microorganisms. Some bacteria have the enzymes to add an amino group to HMB to make Met. We hypothesized that HMBi is converted to HMB more slowly, thus providing a more sustained source of Met to enhance microbial protein synthesis (MPS) and decrease NH3-N excretion. A continuous culture fermenter system was used in a 4 x 4 Latin square design using four fermenters and four periods. The fermenters were inoculated with rumen fluid from two Holstein dairy cows. The treatments were 1) control, 2) Met, 3) HMBi+Met, and 4) HMBi with the latter three all on the same molar basis The stable isotopes 13C-HMBi, 13C-Met, and 2H-Met were infused to study bacterial metabolism. After infusion of ammonium sulfate labeled with 15N, four samples per period per fermenter were collected over 16 hr. I analyzed for N from bacteria, ammonia, and effluent and sent samples for 15N analysis to determine efficiency of microbial N synthesis. I found that HMBi tends to increase peptide N in the HMBi and HMBi+Met treatments and decreased NH3-N for HMBi. In addition, molar percentage of propionate, isovalerate, and valerate were higher in the HMBi and HMBi+Met treatments. In contrast to our hypotheses, bacteria used preformed Met more efficiently and synthesized more Met when HMBi was fed, diverting carbon away from volatile fatty acid (VFA) and adenosine triphosphate (ATP) synthesis.