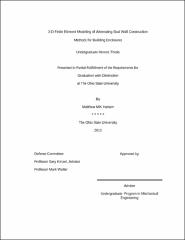 In 2008, 99.3 Quadrillion (1015) BTUs/h of energy were consumed in the United States1. Residential housing consumed 22% of that total, 41% of which was used for house ventilation, cooling, and heating1. In a house, energy is lost to the surroundings through the housing envelope. This research project analyzed a possible wall design which could reduce the loss of heat through the wall portion of the house envelope. The aim of this research was to determine if alternating studs are: a viable option for exterior walls; an efficient means of reducing heat loss from residential houses; and a cost effective method in terms of energy savings. ANSYS finite element modeling software was used to assess a total of four stud configurations– alternating studs, 2x4 studs, and two 2x6 studs models– in terms of structural deflections, structural stress and heat transfer rates. The results show larger deflections of the alternating stud configuration with respect to wind loads and point loads on the studs, though there is no concern for static failure. The alternating stud configuration model was shown to be comparable but slightly better than 2X6 models in terms of heat transfer, and is the best choice in terms of pure heat loss concerns. However, in terms of cost savings, the 2x6-24in center model was shown to be the better choice.