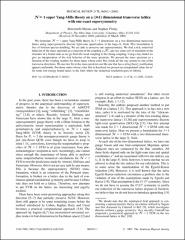 We formulate N=1 super Yang-Mills theory in 3 + 1 dimensions on a two dimensional transverse lattice using supersymmetric discrete light-cone quantization in the large-N_c limit. This formulation is free of fermion species doubling. We are able to preserve one supersymmetry. We find a rich, nontrivial behavior of the mass spectrum as a function of the coupling g√N_c, and see some sort of transition in the structure of a bound state as we go from the weak coupling to the strong coupling. Using a toy model we give an interpretation of the rich behavior of the mass spectrum. We present the mass spectrum as a function of the winding number for those states whose color flux winds all the way around in one of the transverse directions. We use two fits to the mass spectrum and the one that has a string theory justification appears preferable. For those states whose color flux is localized we present an extrapolated value for m^2 for some low-energy bound states in the limit where the numerical resolution goes to infinity.