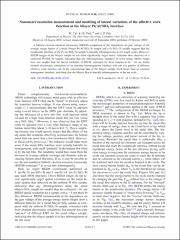 A ballistic electron emission microscopy (BEEM) comparison of the dependence on gate voltage of the average energy barrier of a metal bilayer Pt/Al/SiO_2/Si sample and a Pt/SiO_2/Si sample suggests that the metal/oxide interface of the Pt/Al/SiO_2/Si sample is laterally inhomogeneous at nm length scales. However, BEEM images of the bilayer sample do not show significantly larger lateral variations than observed on a (uniform) Pt/SiO_2/Si sample, indicating that any inhomogeneous "patches" of lower-energy barrier height have size smaller than the lateral resolution of BEEM, estimated for these samples to be ∼ 10 nm. Finite element electrostatic simulations of an assumed inhomogeneous interface with nm size patches of different effective work function can fit the experimental data of the bilayer sample much better than an assumed homogenous interface, indicating that the bilayer film is laterally inhomogeneous at the nm scale.