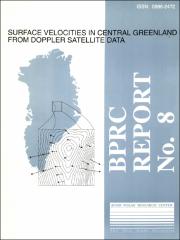 As part of a large-scale glaciological survey in central Greenland under the auspices of the Greenland Ice Sheet Program II (G1SP2), we acquired doppler satellite data during the 1987 and 1989 Greenland field seasons for the purpose of determining the large scale pattern of ice flow in the region. Using Magnavox MX1502 receivers, satellites were tracked at 21 sites distributed over 150 x 150 km grid on the ice sheet, and at fixed points on the east and west coasts. Network adjustments of the satellite data were made using the MAGNET software. Because of the destruction of the fixed point marker on the west coast between 1987 and 1989, we had to determine accurate point positions for both fixed points using the GEODOPV software system with the precise ephemerides for selected satellites. The network coordinates were then transformed so that MAGNET and GEODOPV fixed point positions coincided. The resulting velocities are generally perpendicular to the surface elevation contours, but the flow divide inferred from the velocity components is displaced about 2-3 ice thicknesses to the east of the surface topographic crest.