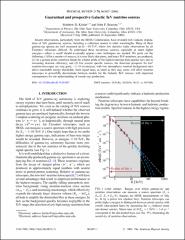 Recent observations, particularly from the HESS Collaboration, have revealed rich Galactic populations of TeV gamma-ray sources, including a collection unseen in other wavelengths. Many of these gamma-ray spectra are well measured up to ~10 TeV, where low statistics make observations by air Cerenkov telescopes difficult. To understand these mysterious sources, especially at much higher energies-where a cutoff should eventually appear-new techniques are needed. We point out the following: (1) For a number of sources, it is very likely that pions, and hence TeV neutrinos, are produced; (2) As a general point, neutrinos should be a better probe of the highest energies than gamma rays, due to increasing detector efficiency; and (3) For several specific sources, the detection prospects for km^3 neutrino telescopes are very good, ~1-10 events/year, with low atmospheric neutrino background rates above reasonable energy thresholds. Such signal rates, as small as they may seem, will allow neutrino telescopes to powerfully discriminate between models for the Galactic TeV sources, with important consequences for our understanding of cosmic-ray production.