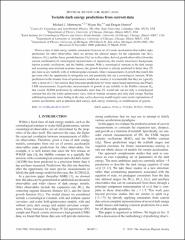 Given a class of dark energy models, constraints from one set of cosmic acceleration observables make predictions for other observables. Here we present the allowed ranges for the expansion rate H(z), distances D(z), and the linear growth function G(z) (as well as other, derived growth observables) from the current combination of cosmological measurements of supernovae, the cosmic microwave background, baryon acoustic oscillations, and the Hubble constant. With a cosmological constant as the dark energy and assuming near-minimal neutrino masses, the growth function is already predicted to better than 2% precision at any redshift, with or without spatial curvature. Direct measurements of growth that match this precision offer the opportunity to stringently test and potentially rule out a cosmological constant. While predictions in the broader class of quintessence models are weaker, it is remarkable that they are typically only a factor of 2-3 less precise than forecasted predictions for future space-based supernovae and Planck CMB measurements. In particular, measurements of growth at any redshift, or the Hubble constant H_0, that exceed ΛCDM predictions by substantially more than 2% would rule out not only a cosmological constant but also the whole quintessence class, with or without curvature and early dark energy. Barring additional systematic errors hiding in the data, such a discovery would require more exotic explanations of cosmic acceleration such as phantom dark energy, dark energy clustering, or modifications of gravity.