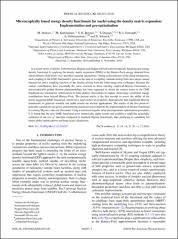 In a recent series of articles, Gebremariam, Bogner, and Duguet derived a microscopically based nuclear energy density functional by applying the density matrix expansion (DME) to the Hartree-Fock energy obtained from chiral effective field theory two- and three-nucleon interactions. Owing to the structure of the chiral interactions, each coupling in the DME functional is given as the sum of a coupling constant arising from zero-range contact interactions and a coupling function of the density arising from the finite-range pion exchanges. Because the contact contributions have essentially the same structure as those entering empirical Skyrme functionals, a microscopically guided Skyrme phenomenology has been suggested in which the contact terms in the DME functional are released for optimization to finite-density observables to capture short-range correlation energy contributions from beyond Hartree-Fock. The present article is the first attempt to assess the ability of the newly suggested DME functional, which has a much richer set of density dependencies than traditional Skyrme functionals, to generate sensible and stable results for nuclear applications. The results of the first proof-of-principle calculations are given, and numerous practical issues related to the implementation of the new functional in existing Skyrme codes are discussed. Using a restricted singular value decomposition optimization procedure, it is found that the new DME functional gives numerically stable results and exhibits a small but systematic reduction of our test χ^2 function compared to standard Skyrme functionals, thus justifying its suitability for future global optimizations and large-scale calculations.