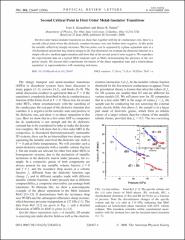 For first order metal-insulator transitions we show that, together with the dc conductance zero, there is a second critical point where the dielectric constant becomes zero and further turns negative. At this point the metallic reflectivity sharply increases. The two points can be separated by a phase separation state in a 3D disordered system but may tend to merge in 2D. For illustration we evaluate the dielectric function in a simple effective medium approximation and show that at the second point it turns negative. We reproduce the experimental data on a typical Mott insulator such as MnO, demonstrating the presence of the two points clearly. We discuss other experiments for studies of the phase separation state and a similar phase separation in superconductors with insulating inclusions.