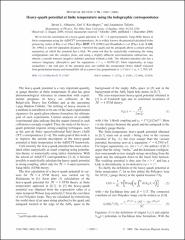 We revisit the calculation of a heavy-quark potential in N = 4 supersymmetric Yang-Mills theory at finite temperature using the AdS/CFT correspondence. As is widely known, the potential calculated in the pioneering works of Rey et al. [Nucl. Phys. B527, 171 (1998)] and Brandhuber et al. [Phys. Lett. B 434, 36 (1998)] is zero for separation distances r between the quark and the antiquark above a certain critical separation, at which the potential has a kink. We point out that by analytically continuing the string configurations into the complex plane, and using a slightly different renormalization subtraction, one obtains a smooth nonzero (negative definite) potential without a kink. The obtained potential also has a nonzero imaginary (absorptive) part for separations r > r_c = 0.870/πT. Most importantly, at large separations r the real part of the potential does not exhibit the exponential Debye falloff expected from perturbation theory and instead falls off as a power law, proportional to 1/r^4 for r > r_0=2.702/πT.