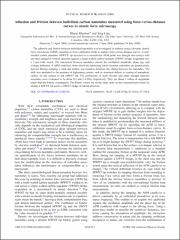 The adhesion and friction between individual nanotubes was investigated in ambient using a dynamic atomic force microscope (AFM) operating in force-calibration mode to capture force-versus-distance curves. A multiwalled carbon nanotube (MWNT) tip attached to a conventional AFM probe was brought into contact with and then ramped in vertical direction against a single-walled carbon nanotube (SWNT) bridge suspended over a 2-μm-wide trench. The interaction between nanotubes altered the oscillation amplitude, phase lag, and average deflection of AFM cantilever, from which the interacting forces between nanotubes are quantitatively derived. During ramping, a stick-slip motion was found to dominate the sliding between the nanotubes. The stick was attributed to the presence of high-energy points, such as structural defects or coating of amorphous carbon, on the surface of the MWNT tip. The coefficients of static friction and shear strength between nanotubes were evaluated to be about 0.2 and 1.4 GPa, respectively. They are about 2 orders of magnitude larger than the kinetic counterparts. The kinetic values are on the same order as that measured previously by sliding a MWNT tip across a SWNT bridge in lateral direction.