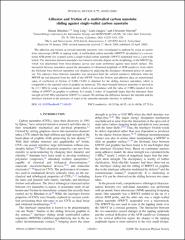 The adhesion and friction at crossed nanotube junctions were investigated in ambient by using an atomic force microscope (AFM) in tapping mode. A multiwalled carbon nanotube (MWNT) tip attached to a conventional AFM probe was scanned across a single-walled carbon nanotube (SWNT) suspended over a 2-μm-wide trench. The interaction between nanotubes was found to critically depend on the morphology of the MWNT tip, which was determined from force-distance curves and scans performed against hard trench surface. The interaction between nanotubes caused the attenuation of vibrational amplitude of AFM cantilever, from which the frictional force between nanotubes was obtained by analyzing the dissipated vibrational power of cantilever. The adhesive force between nanotubes was measured from the vertical cantilever deflection when the MWNT tip end detached from the shell of the SWNT. From the friction and adhesion data, an experimental value of coefficient of friction of 0.006±0.003 is obtained for the sliding between nanotubes, which is comparable to the reported value of graphite on nanoscale. The shear strength between nanotubes is derived to be 4±1 MPa by using a continuum model, which is in accordance with the value of 2 MPa reported for the sliding of MWNT on graphite in ambient. It is nearly 2 orders of magnitude larger than the interlayer shear strength of 0.05 MPa reported for MWNT in vacuum. We attribute the difference between the intertube and the interlayer frictions to the presence of water at the nanotube-nanotube interface in ambient.