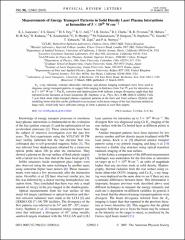 Ka x-ray emission, extreme ultraviolet emission, and plasma imaging techniques have been used to diagnose energy transport patterns in copper foils ranging in thickness from 5 to 75 µm for intensities up to 5×10^20 W cm^-2. The Ka emission and shadowgrams both indicate a larger divergence angle than that reported in the literature at lower intensities [R. Stephens et al., Phys. Rev. E 69, 066414 (2004)]. Foils 5 µm thick show triple-humped plasma expansion patterns at the back and front surfaces. Hybrid code modeling shows that this can be attributed to an increase in the mean energy of the fast electrons emitted at large radii, which only have sufficient energy to form a plasma in such thin targets.