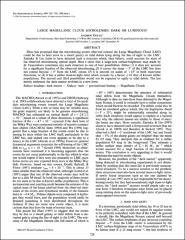 Zhao has proposed that the microlensing events observed toward the Large Magellanic Cloud (LMC) could be due to faint stars in a dwarf galaxy or tidal debris lying along the line of sight to the LMC. Zaritsky & Lin claim to have detected such a structure which, they believe, could account for most of the observed microlensing optical depth. Here I show that a large-area surface-brightness map made by de Vaucouleurs constrains any such structure to one of four possibilities. Either (1) it does not account for a significant fraction of the observed microlensing, (2) it covers the inner ~3° of the LMC but does not extend beyond ~5° from the LMC center, (3) it is smooth on scales of ~15° in both transverse directions, or (4) it has a stellar mass-to-light ratio which exceeds by a factor >~ 10 that of known stellar populations. The second and third possibilities would not be expected to apply to tidal debris. The last merely rephrases the dark-matter problem in a new form.