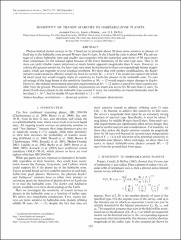 Photon-limited transit surveys in the V band are in principle about 20 times more sensitive to planets of fixed size in the habitable zone around M stars than G stars. In the I band the ratio is about 400. The advantages of a closer habitable zone and smaller stars (together with the numerical superiority of M stars) more than compensate for the reduced signal because of the lower luminosity of the later-type stars. That is, M stars can yield reliable transit detections at much fainter apparent magnitudes than G stars. However, to achieve this greater sensitivity, the later-type stars must be monitored to these correspondingly fainter magnitudes, which can engender several practical problems. We show that with modest modifications, the Kepler mission could extend its effective sensitivity from its current M_V = 6 to 9. This would not capture the whole M dwarf peak but would roughly triple its sensitivity to Earth-like planets in the habitable zone. To take advantage of the huge bump in the sensitivity function at M_V = 12 would require major changes in Kepler. However, the reduced photometric-precision requirements at M_V = 12 makes a search for these transits possible from the ground. Photometric stability requirements are much less severe for M stars than G stars. To detect Earth-mass planets in the habitable zone around G stars, the variability on transit timescales must be less than 2 × 10^-5, but for middle M stars the limit is 1.2 × 10^-3.