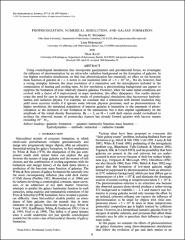 Using cosmological simulations that incorporate gasdynamics and gravitational forces, we investigate the influence of photoionization by an ultraviolet radiation background on the formation of galaxies. In our highest resolution simulations, we find that photoionization has essentially no effect on the baryonic mass function of galaxies at z = 2, down to our resolution limit of ~5 × 10^9 Msun. We do, however, find a strong interplay between the mass resolution of a simulation and the microphysics included in the computation of heating and cooling rates. At low resolution, a photoionizing background can appear to suppress the formation of even relatively massive galaxies. However, when the same initial conditions are evolved with a factor of 8 improvement in mass resolution, this effect disappears. Our results demonstrate the need for care in interpreting the results of cosmological simulations that incorporate hydrodynamics and radiation physics. For example, we conclude that a simulation with limited resolution may yield more accurate results if it ignores some relevant physical processes, such as photoionization. At higher resolution, the simulated population of massive galaxies is insensitive to the treatment of photoionization or the inclusion of star formation in the simulations, but it does depend significantly on the amplitude of the initial density fluctuations. By z = 2, an Ω = 1 cold dark matter model normalized to produce the observed masses of present-day clusters has already formed galaxies with baryon masses exceeding 10^11 Msun.