The Mass of the MACHO-LMC-5 Lens Star 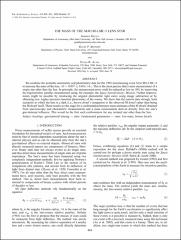 We combine the available astrometric and photometric data for the 1993 microlensing event MACHO-LMC-5 to measure the mass of the lens, M=0.097 +/- 0.016 Msun. This is the most precise direct mass measurement of a single star other than the Sun. In principle, the measurement error could be reduced as low as 10% by improving the trigonometric parallax measurement using, for example, the Space Interferometry Mission. Further improvements might be possible by rereducing the original photometric light curve using image subtraction or by obtaining new, higher precision baseline photometry of the source. We show that the current data strongly limit scenarios in which the lens is a dark (i.e., brown dwarf) companion to the observed M dwarf rather than being the M dwarf itself. These results set the stage for a confrontation between mass estimates of the M dwarf obtained from spectroscopic and photometric measurements and a mass measurement derived directly from the star's gravitational influence. This would be the first such confrontation for any isolated star other than the Sun.