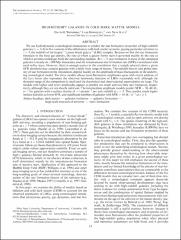 We use hydrodynamic cosmological simulations to predict the star formation properties of high-redshift galaxies (z = 2-6) in five variants of the inflationary cold dark matter scenario, paying particular attention to z = 3, the redshift of the largest "Lyman break galaxy" (LBG) samples. Because we link the star formation timescale to the local gas density, the rate at which a galaxy forms stars is governed mainly by the rate at which it accretes cooled gas from the surrounding medium. At z = 3, star formation in most of the simulated galaxies is steady on ~200 Myr timescales, and the instantaneous star formation rate (SFR) is correlated with total stellar mass. However, there is enough scatter in this correlation that a sample selected above a given SFR threshold may contain galaxies with a fairly wide range of masses. The redshift history and global density of star formation in the simulations depend mainly on the amplitude of mass fluctuations in the underlying cosmological model. The three models whose mass fluctuation amplitudes agree with recent analyses of the Lyα forest also reproduce the observed luminosity function of LBGs reasonably well, although the dynamic range of the comparison is small and the theoretical and observational uncertainties are large. The models with higher and lower amplitudes appear to predict too much and too little star formation, respectively, although they are not clearly ruled out. The intermediate amplitude models predict SFR ~ 30-40 Msun yr^-1 for galaxies with a surface density of ~1 arcmin^-2 per unit redshift at z = 3. They predict much higher surface densities at lower SFR, and significant numbers of galaxies with SFR > 10 Msun yr^-1 at z ≥ 5.