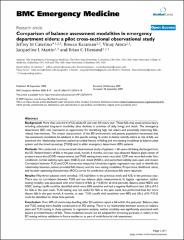 Background: More than one-third of US adults 65 and over fall every year. These falls may cause serious injury including substantial long-term morbidity (due declines in activities of daily living) and death. The emergency department (ED) visit represents an opportunity for identifying high risk elders and potentially instituting fallsrelated interventions. The unique characteristic of the ED environment and patient population necessitate that risk-assessment modalities be validated in this specific setting. In order to better identify elders at risk of falls, we examined the relationship between patient-provided history of falling and two testing modalities (a balance plate system and the timed up-and-go [TUG] test) in elder emergency department (ED) patients. Methods: We conducted a cross-sectional observational study of patients ≥ 60 years old being discharged from the ED. Patient history of falls in the past week, month, 6 months, and year was obtained. Balance plate center of pressure excursion (COP) measurements and TUG testing times were recorded. COP was recorded under four conditions: normal stability eyes open (NSEO) and closed (NSEC), and perturbed stability eyes open and closed. Correlation between TUG and COP scores was measured. Univariate logistic regression was used to identify the relationship between patient-provided falls history and the two testing modalities. Proportions, likelihood ratios, and receiver-operating-characteristic (ROC) curves for prediction of previous falls were reported. Results: Fifty-three subjects were enrolled, 11% had fallen in the previous week and 42% in the previous year. There was no correlation between TUG and any balance plate measurements. In logistic regression, neither testing modality was associated with prior history of falls (p > 0.05 for all time periods). Balance plate NSEO and NSEC testing cutoffs could be identified which were 83% sensitive and had a negative likelihood ratio (LR-) of 0.3 for falls in the past week. TUG testing was not useful for falls in the past week, but performed best for more distant falls in the past month, 6 months, or year. TUG cutoffs with sensitivity over 80% and LR(-) of 0.17-0.32 could be identified for these time periods. Conclusion: Over 40% of community-dwelling elder ED patients report a fall within the past year. Balance plate and TUG testing were feasibly conducted in an ED setting. There is no relationship between scores on balance plate and TUG testing in these patients. In regression analysis, neither modality was significantly associated with patient provided history of falls. These modalities should not be adopted for screening purposes in elders in the ED setting without validation in future studies or as part of multi-factorial risk assessment.