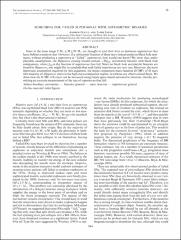 Stars in the mass range 8 Msun <~ M <~ 30 Msun are thought to end their lives as luminous supernovae that leave behind a neutron star. However, if a substantial fraction of these stars instead ended as black hole remnants, without producing a supernova (a "failed" supernova), how would one know? We show that, under plausible assumptions, the Hipparcos catalog should contain ~30f_fail astrometric binaries with black hole companions, where f_fail is the fraction of supernovae that fail. Since no black hole astrometric binaries are found in Hipparcos, one might like to conclude that such failed supernovae are very rare. However, the most important assumption required for this argument, the initial companion mass function (ICMF) of G stars (the majority of Hipparcos stars) in the high-mass companion regime, is without any observational basis. We show how the ICMF of G stars can be measured using future space-based astrometric missions, thereby permitting an accurate measurement of the rate of supernovae that fail.