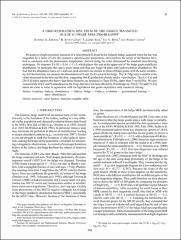 We analyze a high-resolution spectrum of a microlensed G dwarf in the Galactic bulge, acquired when the star was magnified by a factor of 110. We measure a spectroscopic temperature, derived from the wings of the Balmer lines, that is consistent with the photometric temperature, derived using the color determined by standard microlensing techniques. We measure [ Fe/H ] = 0.36 ± 0.18, which places this star at the upper end of the bulge giant metallicity distribution. In particular, this star is more metal-rich than any bulge M giant with high-resolution abundances. We find that the abundance ratios of α and iron-peak elements are similar to those of bulge giants with the same metallicity. For the first time, we measure the abundances of K and Zn for a star in the bulge. The [K/Mg] ratio is similar to the value measured in the halo and the disk, suggesting that K production closely tracks α production. The [Cu/Fe] and [Zn/Fe] ratios support the theory that those elements are produced in Type II SNe, rather than Type Ia SNe. We also measured the first C and N abundances in the bulge that have not been affected by first dredge-up. The [C/Fe] and [N/Fe] ratios are close to solar, in agreement with the hypothesis that giants experience only canonical mixing.