Can Heavy WIMPs Be Captured by the Earth? 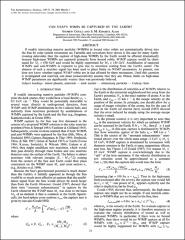 If weakly interacting massive particles (WIMPs) in bound solar orbits are systematically driven into the Sun by solar system resonances (as Farinella and coworkers have shown is the case for many Earth-crossing asteroids), then the capture of high-mass WIMPs by the Earth would be affected dramatically because high-mass WIMPs are captured primarily from bound orbits. WIMP capture would be eliminated for M_x > 630 GeV and would be highly suppressed for M_x >~ 150 GeV. Annihilation of captured WIMPs and anti-WIMPs is expected to give rise to neutrinos coming from the Earth's center. The absence of such a neutrino signal has been used to place limits on WIMP parameters. At present, one does not know whether typical WIMP orbits are in fact affected by these resonances. Until this question is investigated and resolved, one must (conservatively) assume that they are. Hence, limits on high-mass WIMP parameters are significantly weaker than was previously believed.