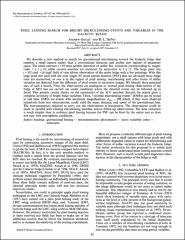 We describe a new method to search for gravitational microlensing toward the Galactic bulge that employs a small camera rather than a conventional telescope and probes new regions of parameter space. The small aperture (~65 mm) permits detection of stellar flux variations corresponding to magnitudes 7 <~ I <~ 16, while current searches are restricted by saturation to I >~ 15. The large pixel size (~10'') and ~(6 deg)^2 field of view allows observation of the entire bulge with a few pointings. With this large pixel size (and with the even larger 30'' point-spread function [PSF] that we advocate) most bulge stars are unresolved, so one is in the regime of pixel lensing: microlensing and other forms of stellar variation are detected from the difference of pixel counts in successive images. We identify three principal uses of such a search. First, the observations are analogous to normal pixel lensing observations of the bulge of M31 but are carried out under conditions where the detected events can be followed up in detail. This permits crucial checks on the systematics of the M31 searches. Second, the search gives a complete inventory of bright bulge variables. Third, "extreme microlensing events" (EMEs) can be found in real time. EMEs are events with maximum magnifications A_max ~ 200 which, if they were observed intensively from two observatories, could yield the mass, distance, and speed of the gravitational lens. The instrumentation required to carry out the observations is inexpensive. The observations could be made in parallel with existing microlensing searches and/or follow-up observations. The data reduction is much simpler than in ordinary pixel lensing because the PSF can be fixed by the optics and so does not vary with atmospheric conditions.